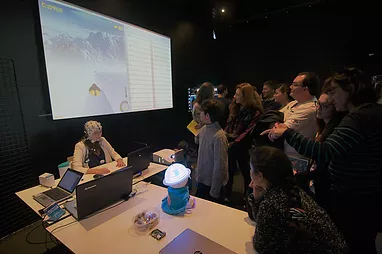 Scientific Outreach
For the sake of assisting the public in understanding the concepts of Brain Computer Interface, we presented in Bordeaux Science Museum our experiment called Tux Flow.
Tux Racer is an open source video game which we modified to be manipulated with Motor Imagery BCI, i.e., the penguin can be manipulated by imagining left or right hand movements. The goal of little Tux is to catch as much fish as possible, and for the participants to move Tux by focusing to imagine separately one hand from the other.

As imagined movements can’t be seen, for the sake of clarity, in front of me was Teegi, a robot which reveals the active areas of one’s brain, and moves those hands which movement is imagined. In our case, as my brain activity was being measured by an EEG cap (BrainProduction LiveAmp 32 channels), Teegi’s corresponding brain zones would illuminate contralateraly (right zone of the sensory-motor cortex indicating left hand movement and vice versa) — very useful for revealing the underlying brain functions to the public.